The Problem with Fake Meats Consumers today are bombarded with ads for various forms of plant-based meat products, what I term “fake meat.” Curiously, many who are manufacturing and selling these products, as well as their supporters, prefer to call them “clean proteins.”

The ads appear to be almost everywhere—on the TV, in magazines, radio, billboards, store signs, newspaper and any place imaginable. It’s pretty much "impossible" not to come in contact with this fake meat trend.

What the Ads Are Saying

Most ads tout the supposed benefits of plant-based proteins, and somehow confer on them a “cleanness” that implies they are far better for health, environment and climate change than any real protein could be.

In one commercial where they are showing people taste-testing a fake-meat hamburger and supposedly loving the taste, one of the characters says,“I’ve been a #@$*ing Fool!”

I do hope that we all know the people in the ads are actors spouting their lines, and that even what they are wearing is very purposeful and planned. They are meant to represent all sorts of people from all walks of life.

What the Ads Aren't Saying

The problem with most of these ads is that they provide little to no documentation of the “facts” they are so freely spouting. There’s quite a lot that they don’t tell you:

Make no mistake about it... The fake meats that are currently on the market are mostly high-processed food products that bear little-to-no resemblance to real, wholesome food.

The most commonly known fake meat made strictly from plant materials is the Impossible Burger. This product is touted as being, Halal, Kosher certified, and 100% vegan with zero animal products or by-products. 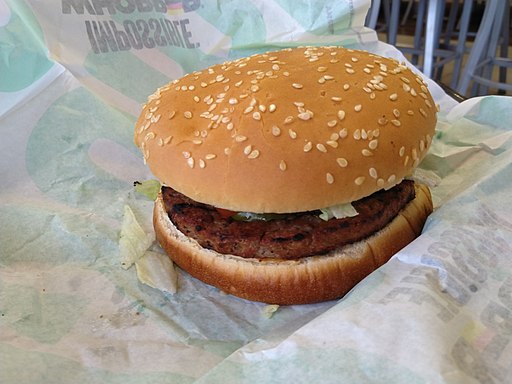 The published list of ingredients for the Impossible Burger (from most to least) are:

Looking at the list, water comprises the highest percentage of all ingredients, so people are paying quite a lot of money for water!

The next highest ingredient is soy protein concentrate. While soybean protein is classified as a complete protein, it has potential drawbacks.Soybeans are legumes, which produce phytoestrogens. Too much phytoestrogen in our diet may have a negative impact on endocrine function.

Soybean itself is not a great source of omega-3 fatty acids, and soybean oil has a ratio of omega-6 to omega-3 fatty acids of about 7:1, meaning that we are getting seven times the omega-6 in our diet compared to omega-3. So, while there is omega-3 in soybeans our bodies cannot actually use much of it.

When we also consider the facts that:

...we have to ask, are fake meats really helping the environment, ecosystem, and our own long-term health as much as these ads would like us to perceive?

In order to remove animal products and by-products, are we saying it is okay to…

As we further examine the list, we find coconut oil and sunflower oil make up a hefty percentage of the ingredients.

Sunflower oil is one of the worst oils when it comes to the omega-3 to omega-6 ratio.

Sunflower oil has an omega-6 to omega 3 ratio of 70:1. This is ridiculously high and can lead to tissue inflammation, which can lead to a host of diseases and disorders in the body.

Coconut oil actually has little to no appreciable omega-3 fatty acids, and about 3.92g of omega-6 fatty acids per cup. It is high in saturated fat, with a single cup of coconut oil containing 218g of total fat (87% of that fat being saturated).

The next ingredient “natural flavors,” whatever that means. What natural flavors can possibly be used to simulate the flavor of meat, other than meat itself?

The remainder of the list of ingredients reads like the label of some sort of manufactured chemical solution, which really isn’t that far off when you’re talking about the Impossible Burger and other fake meat products.

To be truthful, it is a display of extreme hubris to think that we, as humans, can design a “food” synthetically that is anywhere near the true nutrient value and composition of real foods produced by nature. As a scientist myself, I believe this represents the height of scientific arrogance.

Manufactured foods will produce unintended consequences. These unintended consequences will carry through to multiple generations through epigenetic effects that are transgenerational. In other words, what we eat today will affect our children, and our children’s children. We have already seen this happen in the manufactured foods that are quite common in the middle aisles of every grocery store.

A Closer Look at Nutrition

Let’s examine a comparison of the common nutritional values between real beef and the Impossible Burger.

Considering the same serving size of 4 oz., the number of calories derived from either real beef or the Impossible Burger are very similar, as is total fat and saturated fat. So, the 100 percent vegan version of “meat” does not provide any advantage in fat content.

Our bodies do require some sodium for many basic processes to occur. These include muscle function, nerve impulse regulation, and balance of fluids. However, too much sodium in the diet can lead to serious and significant health problems that include high blood pressure, damage of vessel walls, increased risk of atherosclerosis, and increased risk of heart attack and stroke. Additionally, too much sodium can cause edema, manifested in swelling of the knees, feet, and even hands. It can lead to stomach damage, including increased chance of stomach cancer and encourages overconsumption.

Protein in real beef comes in at 28 g for a four-ounce serving compared to 19 g in the Impossible Burger. So real beef has 1.5 times the amount of protein in a single serving. Now, if we make that real beef a grass-fed beef, we have a distinct nutritional advantage over the fake meat.

Who were the “Fastest” early adopters?

What sector of the food industry was first to jump on the fake meat bandwagon? Ironically, it has been the fast food sector, also called QSR (Quick Service Restaurants). A high percentage of ads spouting the benefits of fake meat have been from these companies, as if putting a fake burger patty between two buns, smothered in condiments makes it any better for our health than a real hamburger patty. Or, a fake meat fried chicken being better for our health than real friend chicken. So, we can now eat fast food and feel good about ourselves because suddenly we are eating healthy? I don’t think so.

Why do we need Fake Meats?

I must ask the question, “Why do we need fake meat?” Mankind has always had the choice of what to eat from the natural world. If you want to eat an all plant-based diet, you are free to do so. You do not need a fake meat to assist you in that endeavor.

If the contention is you are eating a fake meat to somehow help mitigate climate change, then just how are you accomplishing that? The manufacture of fake meat is not without the expenditure of energy, water, and environmental impacts.

The real reasons for a fake meat product are two-fold:

In Defense of Fat Part 2: Bringing Fatback (to Pork)