Joyce Farms Featured on Menu for "Dinner of the Century" in New Orleans!

A few months back, renowned New Orleans Chef John Folse requested our Heritage Beef for a special dinner he was planning along with the American Academy of Chefs® and the Chaîne des Rôtisseurs. This "Dinner of the Century" would precede the American Culinary Foundation (ACF) National Convention & Show in New Orleans.

As our conversations continued, we discovered there was some fascinating history behind this dinner, which was held in celebration of New Orleans’ Tricentennial year.

Chef Folse planned the event to be a historical recreation of a 1671 banquet honoring King Louis XIV, Louisiana’s namesake, at Château de Chantilly in France. But this story is not so much about the King; the real star of this story is François Vatel, the maître d’hôtel at the Château de Chantilly. Vatel was known for his ability to organize the most lavish parties and feasts. Born in Switzerland as Fritz Karl Watel, he apprenticed as a pastry cook before assuming a position with Nicolas Fouquet, Superintendent of Finances for King Louis XIV of France.

In his time at Fouquet's château Vauxle-Vicomte, Vatel's skills were quickly recognized. He organized meals and displays of opulence that made even the King jealous. Eventually this led to Fouquet's jailing in 1661, leading Vatel to his next venture.

Around the year 1667, Vatel went to work at the Château of Chantilly for Louis II de Bourbon, Prince de Condé. He was held in high regard and was even given his own living quarters and allowed to carry a sword, which was considered an honor for someone in his position.

In early April 1671, King Louis XIV announced he would visit the Prince de Condé at the Château of Chantilly for three days later that month. A visit from the King was an honor of course, but required a daunting amount of preparations, even for Vatel. A royal dinner usually meant no less than twenty substantially sized dishes, and he was not just preparing for the King, but also his thousands of additional nobles and their “hangers on.” Most importantly, he only had 15 days to do it!

In the time leading up to the visit, Vatel became consumed in his preparations, barely sleeping for 12 nights. Even after days of tireless planning, things didn't go as Vatel hoped when the King arrived.

Accounts suggest that the first blow came when the fireworks Vatel planned as entertainment were shrouded by fog. Things escalated when it came time for a delivery of fish for dinner. Apparently Vatel had placed quite a large order for fish, and on that night, he saw a single small delivery arrive. He asked if that was all, and the person delivering the order indicated it was. Vatel did not realize that he had meant for that first load. 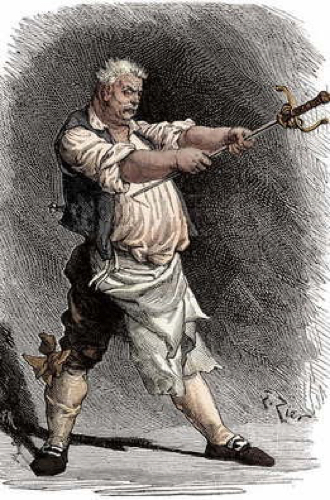 Though they had gotten delayed, several more deliveries were on their way. Vatel, not realizing this, was overwhelmed with panic over the situation at hand. He could not bare the shame that would befall him for this mistake. So, Vatel retreated to his quarters and “fell upon his sword.” He was discovered by someone who came to tell him that the rest of the fish had arrived.

Thankfully, the 2018 event had a happier ending. No one was harmed, all ingredients arrived on time, and everyone enjoyed a delicious feast! The “Dinner of the Century” took place on July 14th at the Royal Sonesta in New Orleans, and over 280 guests from the American Academy of Chefs and the Chaîne des Rôtisseurs were in attendance. Proceeds from the dinner were split between the AAC’s two foundations for scholarships and financial assistance for young culinarians. See more photos from the "Dinner of the Century" event.

Eighteen new Fellows of the Academy were inducted along with six Honorary Fellows, five inductees into the Hall of Fame (two posthumously), as well as Honorary Hall of Fame and Celebrated Chef, Susan Spicer.

Congratulations to all the new inductees! See the full list of inductees here.

To learn more about Vatel and the Dinner: