The Circle of Life: How the Carbon Cycle Powers our Ecosystem

Kids learn about natural circles in school like the water cycle. The big idea there is rain falls, then evaporates back into the air, before coming down again as rain somewhere else.

Despite this simple training in circles, most of us think in lines. In a linear world, we fail to see the connection between precipitation and evaporation, or soil health and the quality of our food. In agriculture, line-based thinking has led to problems.

For decades, farmers have believed using chemical fertilizers increases their output of plants. Like a line, they believe one always leads to the other, failing to consider impacts on the rest of the ecosystem. The eventual result is a breakdown of natural cycles on their farms.

By understanding natural cycles, farmers can adapt and work with those cycles to see their land thrive for generations to come.

It’s time to leave line-based thinking behind and start thinking in circles again, and on pastures, the key circle to understand is the carbon cycle.

The carbon cycle has three components: plants, soil and grazers. 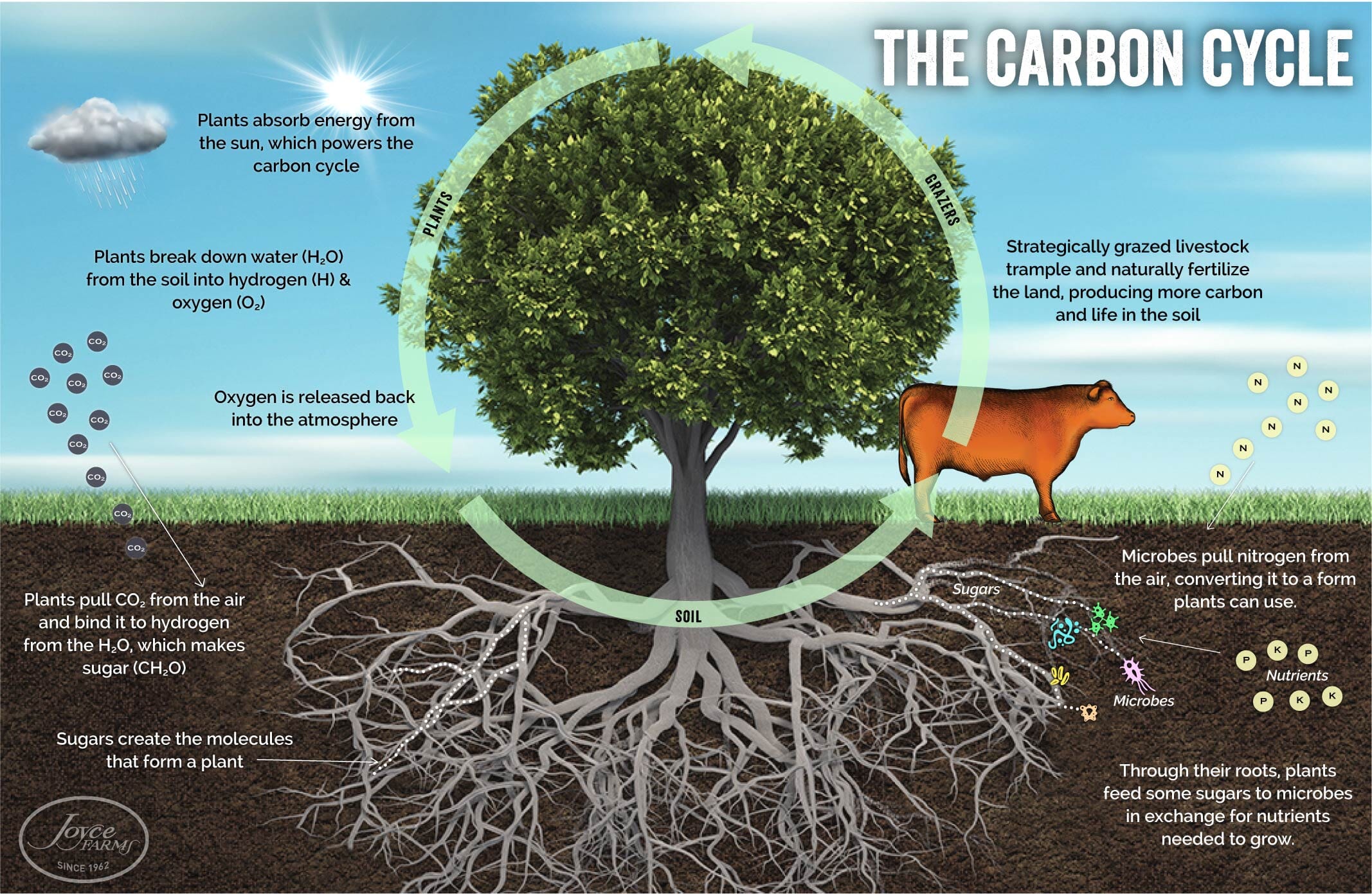 All carbon starts in the air as the C in CO2. Through photosynthesis, plants take the carbon from CO2 in the air, combine it with hydrogen from water (H2O) in the soil and, using energy from the sun, make sugar (CH2O). Rather than being left with a puddle of sticky sugar on the ground, a plant’s metabolism takes that sugar and makes all of the complex molecules of what we recognize as a plant.

We might have once thought that these minerals were just sitting around waiting to be taken in by the plant, but now we know that the microbiological system in the soil has to bring nutrients to the plants. The key here is that growing roots actually leak sugars. Basically, the plant ‘pays’ the microbes with some of its sugars to go out and bring back the nutrients the plant needs to grow.

Root death occurs when more than 50 percent of the plant leaf biomass is removed, so it's critical to keep the roots growing and pumping out sugars to feed microbes by never grazing more than 50 percent of the above-ground biomass. This can be achieved through rotational grazing. In doing this, we keep pumping a continuous stream of sugars into the soil and fuel the soil microbes to provide an ongoing stream of nutrients funneling back to the plant.

There is one important sub-cycle in all this—the nitrogen cycle. Nitrogen actually makes up a very small fraction of a plant’s total mass, but it’s critical for growth. Although air is highly abundant in nitrogen, plants are completely unable to make use of it directly.

But plants grew before synthetic fertilizer was invented, right? This was because microbes in the soil had the machinery to convert the nitrogen into a form plants could access. In healthy soil, microbes are not only mining the minerals from the dirt, they also are pulling the critical element of nitrogen quite literally out of thin air.

The final piece of the carbon cycle is grazing. Most of the biomass in grass, or any other plant, is tied up in complex polymers like cellulose and lignin, which are a stockpile of stored solar energy. This solar power is completely inaccessible to humans, but it is indirectly accessible to cattle. Cattle are part of a group of animals called ruminants, along with sheep and bison that chew the cud regurgitated from their rumen. Rumen is the first stomach of a ruminant, where food or cud is received and partly digested with the aid of bacteria, before passing on to another part of the animal’s digestive tract.

What enables these grazers to access that energy are the microbes in their rumens. Microbes in the rumen break down grass into fats that the animal can then use.

A ruminant is a solar-powered grass harvesting and processing miracle. Cattle that move across the land (using rotational grazing, eating no more than half the grass) leave partially digested biomass (i.e. manure and nitrogen-rich urine) spread evenly in their wake. What gets left behind is everything the grass needed to grow in the first place—a sort of customized fertilizer. Their trampling also provides an armor of plant life for the soil and feeds the soil microbes, producing new carbon and stimulating new soil life.

Together, the cycles of plant, soil and grazer form the carbon cycle in a pasture. It's powered by sunshine, but enabled by a complex and inter-connected circle of cycles where biological life does all the hard work.

Our atmosphere has always contained some carbon dioxide and other greenhouse gasses -- nature designed it that way. They play a critical role by trapping heat from the sun and using it to keep the earth warm and able to sustain life.

When the carbon cycle is in balance, carbon dioxide is emitted into the atmosphere, then returned to its source in an ongoing pattern. However, since the dawn of agriculture thousands of years ago, humans have been disturbing that balance with degenerative farming practices, like tilling, that kill soil life and release too much carbon dioxide into the air. Today, carbon dioxide levels in our atmosphere are higher than ever. By understanding and working with the carbon cycle, we can put the excess to good use by putting it back in the soil.

The bigger story isn’t just about cattle, grass and soil, but about all layers of life in an ecosystem. In the end, our objective is to keep this cycle going over and over, not letting carbon get stuck above or below the ground, which allows us to regenerate the land as we use it. We strive to keep the carbon cycle moving, as it drives the circle of life.